As you know, I’m just back from a beautiful two weeks in Orlando, Florida. My parents currently live there, so The Bulgarian and I decided that visiting them mixed with visiting Disney World was the perfect summer holiday.

We got to do so much, every day was busy. This was a really different kind of trips to our usual city breaks around Europe, but I loved it.

Here’s what we got up to: 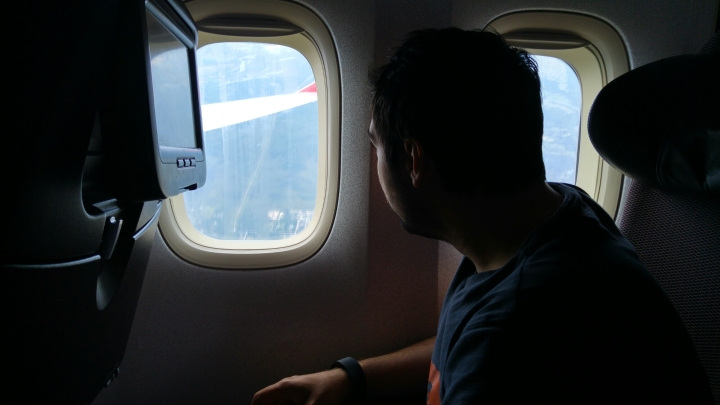 Day One: We landed in Florida around 5pm, and by the time we got through immigration, it was about 6. My parents were waiting in arrivals for us, and we headed back to their neighbourhood. By this point, we were pretty tired. Bear in mind that the UK is five hours ahead, so it was our night time. We went for dinner in a local restaurant, and then home to bed. 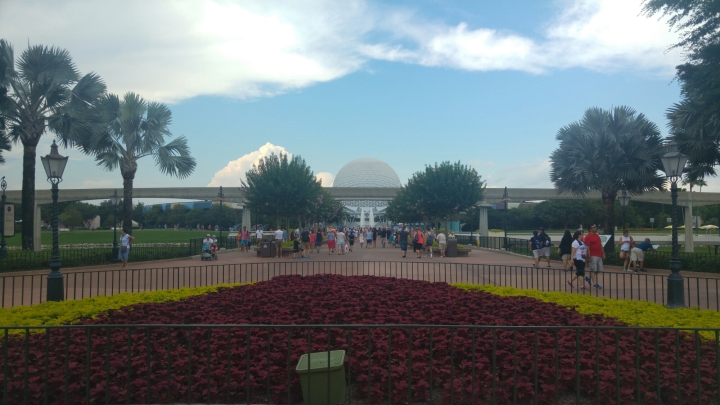 Day Two: This was a Sunday, so my dad wasn’t working. We had booked our Disney tickets in advance, and while I had hoped to bring The Bulgarian to the Magic Kingdom for his first ever Disney experience, my parents said it would likely be extremely busy given that it was a weekend. They live there, so we figured they’d know better and opted for Epcot instead.

Epcot is actually my favourite of the Disney parks, and the Bulgarian is a science geek, so it was right up his alley. 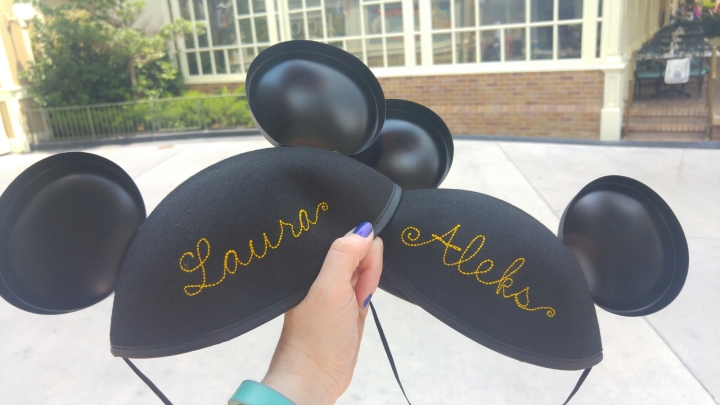 Day Three: The Magic Kingdom! It was so hot that it was actually unpleasant to walk around. We spent a lot of time ducking indoors for some air conditioning and cold drinks. We downloaded the Disney World app in advance, which allowed us to book fast passes for the rides. We managed to get my little brother to go on Space Mountain. A real achievement, given he’s usually a bit of a chicken! 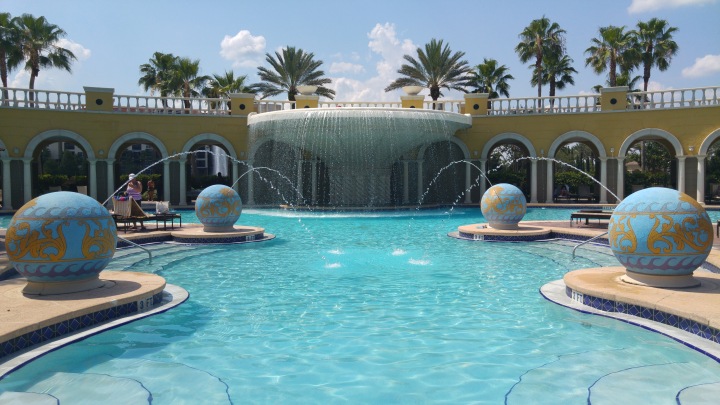 Day Four: This day was spent moving our things from my parents’ house to the hotel we’d be staying in for the rest of our trip. We still planned to see my family lots throughout the trip, but it was nice to have some us time too. Once we dropped off our things, we went on a shopping trip to some of the outlet stores.

There’s an American Eagle outlet store in Florida that I’ve often bought shirts and things for the Bulgarian in. It’s so much cheaper than the UK, so he wanted to go and have a look for himself. For just over $50, he ended up coming out with two pairs of jeans, a shirt and a t-shirt. Bargain! 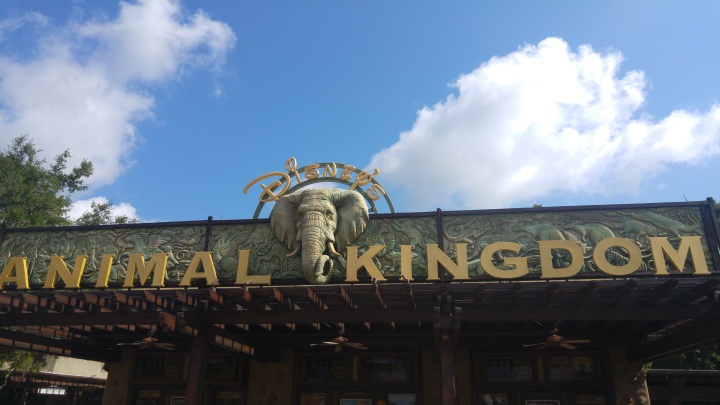 Day Five: The Animal Kingdom! Again, it was a crazy hot day but thankfully a lot of the park is shaded by trees and plants. 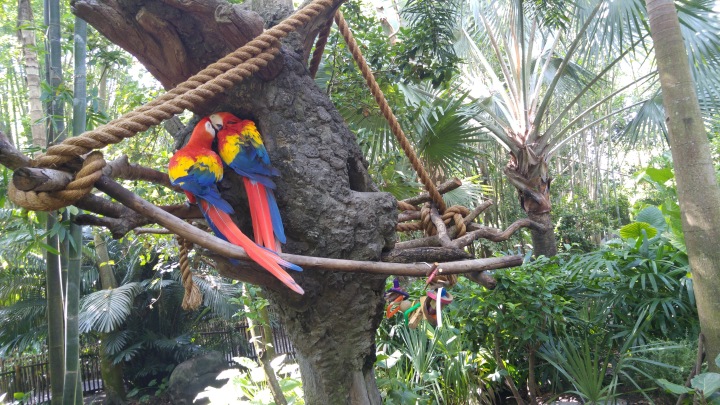 The queues here weren’t too bad, so we managed to get on a bunch of rides, not just the ones we had fast passes for. 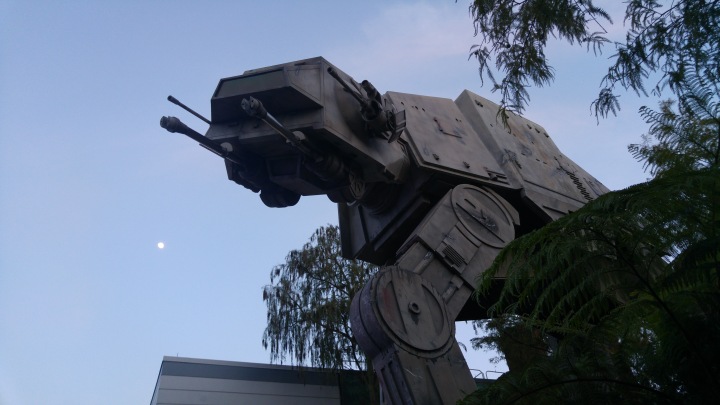 Day Six: Hollywood Studios. I’ll be honest with you, this is my least favourite Disney park.

The park has two great rides, Rock ‘n’ Rollercoaster and Tower of Terror, which the Bulgarian and I both loved. I was really sad to see they had gotten rid of the animation gallery though. In past years, you could tour some of the drawing and concept art of classic Disney movies, and sometimes even see the animators at work. I remember seeing the artists drawing Mulan even before the film came out, many years back!

In place of the animation exhibits is a Star Wars gallery. While I understand this is what’s popular now, it seems a shame they got rid of something so lovely for something that’s clearly just there to bring in the punters and make money. It feels like they’ve cheapened themselves a little bit. 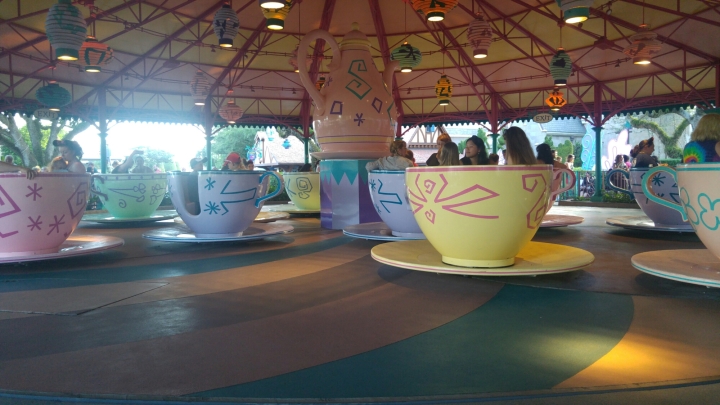 Day Seven: Magic Kingdom again! Its such a great park and there’s so much to see that it’s always worth another visit. 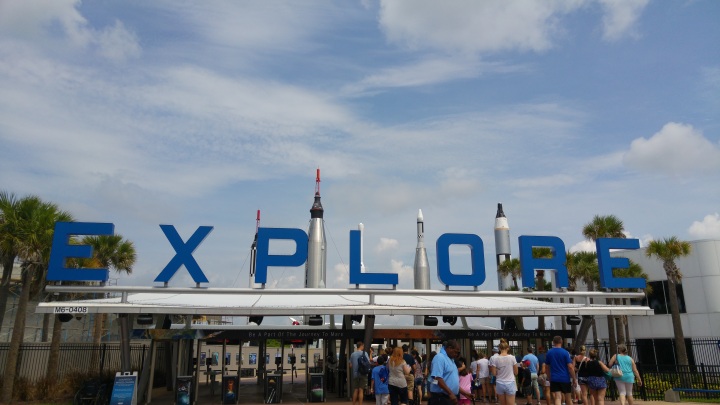 Day Eight: This one was pretty special.

My mom very kindly drove us all the way down to Cape Canaveral, about an hour or so’s drive south of Orlando. This is the home of the Kennedy Space Centre.

We got to see so much, including launch pads of the Apollo missions and the Atlantis space shuttle. It’s incredibly awe inspiring looking up at this big shuttle, knowing that that once transported people into space, and now here it is, mere feet from you.

We spent all day in the Space Centre, and I still don’t feel like it was enough time.

Computing power nowadays is vastly greater than it was at the time of the moon launch. An iPhone 3 has more computing power than the computer used to send men to the moon, and yet they still did it. I love technology (obviously, having studied Computer Science and working in IT), but seeing things like this up close is incredible. I feel lucky to have had this day with the Bulgarian and my brother.

In the evening, we went for dinner in a traditional Southern style restaurant called Cracker Barrel and then on to Old Town, where there is usually a parade of old cars every Saturday night. Unfortunately, it had been pretty lousy weather, so most of the cars had gone by the time we arrived, but it was fun nonetheless! 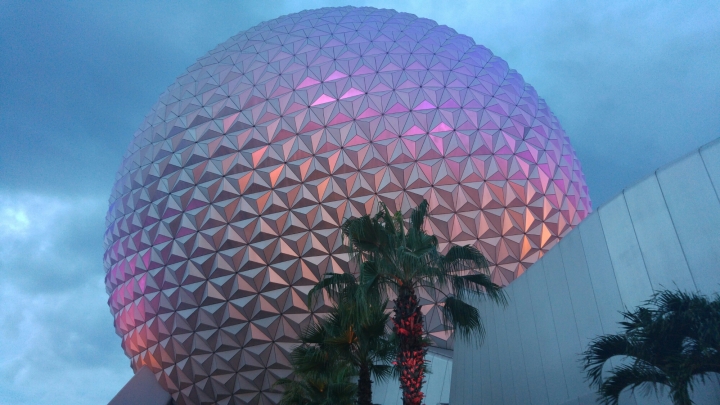 Day Nine: This was Father’s Day in the US! We all went back to Epcot again, the Bulgarian, my brother, my parents and I. My other brother lives in Montreal, but we had decided to take Dad for a belated Father’s Day dinner when he arrived in Florida the following week.

The Bulgarian also got to try his first Taco Bell that night! I’m pretty sure he’s now in love. 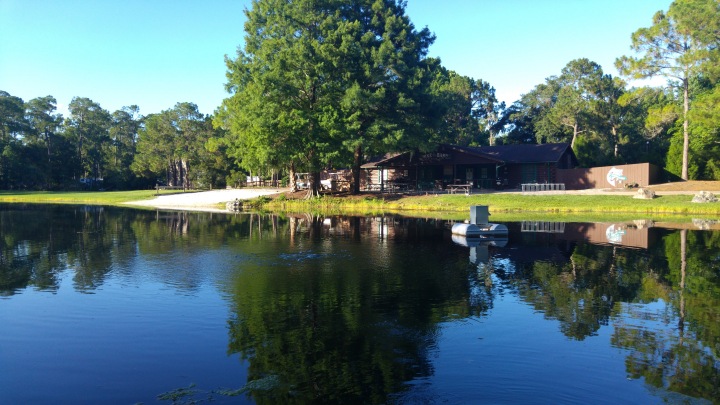 We spent the morning by the pool and had breakfast in the sun, but my brother and mom showed up soon after to join us for a swim.

This time, my dad had to work, but the rest of us headed along to Hollywood Studios.

We managed to get my chicken little brother onto Rock ‘n’ Rollercoaster, but he refused point blank to go near Tower of Terror.

After the park, we met my dad in Fort Wilderness, a hotel where guests can rent out log cabins! Its a really pretty place to walk around.

That night, the Bulgarian and I went out to dinner together to a Mexican restaurant. Mexican is one of my absolute favourite cuisines (in case various Foodie Fridays didn’t give you a hint!). The cheesy fondue style dip we got was unbelievable. 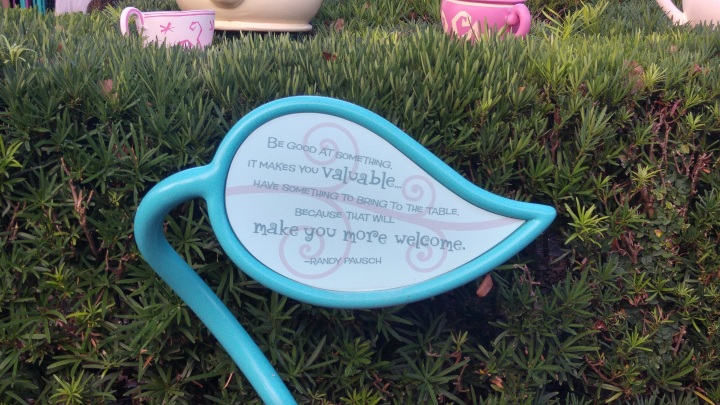 Day Eleven: One last jaunt to the Magic Kingdom.

My brother has always been terrified of Splash Mountain, but this time he agreed to give it a go, and loved it!

After the park, the Bulgarian took my family and I to a restaurant called Sweet Tomatoes. My parents had been incredibly generous to us throughout the trip, and he wanted to take them out as a thank you. Sweet Tomatoes is a buffet style restaurant specialising in salad, and one my mom had wanted to visit for awhile. I suggested we go here, as I’m not sure my carnivorous father would have been keen otherwise! 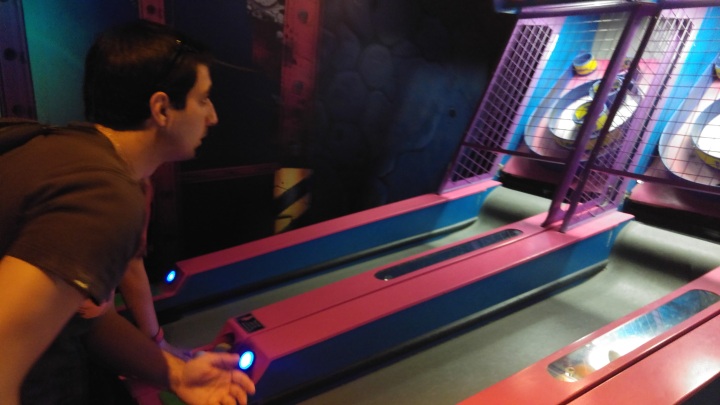 Day Twelve: The waterpark! You won’t see any photos from this excursion, for obvious reasons. It was again, incredibly hot, so that kind of put a damper on the fun (pun intended).

After awhile, we decided to leave the water park and made our way to Disney Springs, a kind of village with a bunch of shops and bars and a place called Disney Quest. Disney Quest is basically an arcade, and perfect for being indoors in the air conditioning when the weather is too much to handle (Florida can get pretty stormy as well as too hot). At the time it opened, Disney Quest was state of the art, and being a pre-teen computerphile, you couldn’t get me out of the place. Seeing it now through older eyes, it’s very dated and no surprise that Disney has plans to close it down over the following months.

Nonetheless, it was good fun for a few hours!

This was the day my brother arrived down from Montreal, but his plans were to just hang out at home and we’d see him the following day. He didn’t have passes to the parks, so the Bulgarian and I had decided to make this the last day of Disney so that we could spend time with my brother the following day.

The Bulgarian had wanted to see the fireworks in Epcot one last time, so after Disney Quest, we made our way over there. By the time we got into the park, we had just enough time to use our fast passes. After the rides, energy was visibly low and the Bulgarian said he’d rather just go for dinner and then head on back to the hotel.

We went for dinner in a place called Uno Pizzeria, near Disney World. It does Chicago style pizza, so they’re really deep dishes. They were so good, but so filling we could only eat half each! 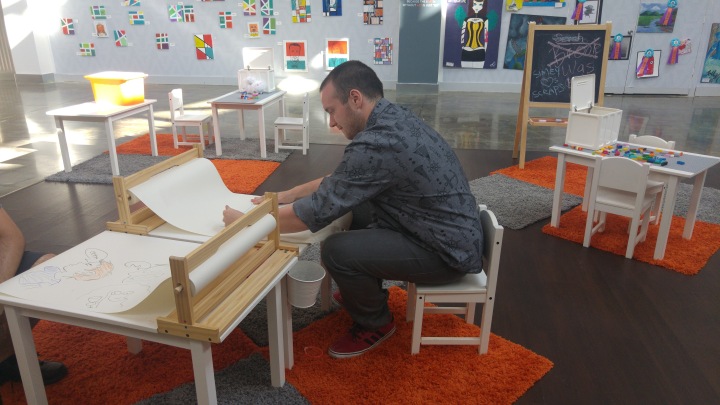 Day Thirteen: This was the day we got to see my Montreal-dwelling brother.

He wanted to do some shopping while in the US, so we paid a visit to the outlet stores again and then to a mall called Artegon. Artegon’s shtick is that it leases space to independent sellers and boutiques, so its kind of a market slash mall.

That night, we went for dinner in the Olive Garden, one of my dad’s favourites, (mostly) courtesy of the gift card from Canada Brother and I! It was a really nice last meal to round off a beautiful holiday. 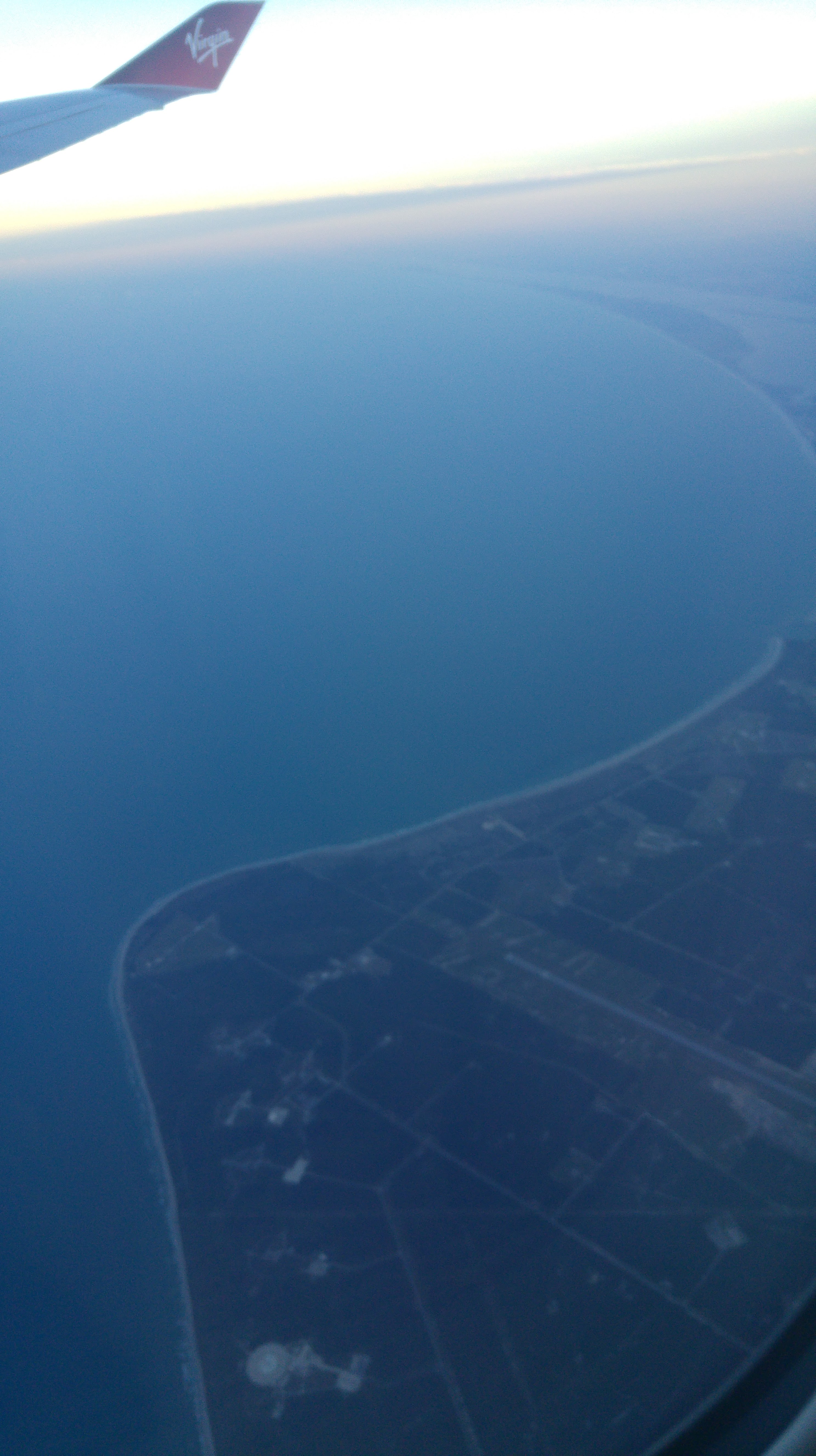 Day Fourteen: Travelling back to England.

Our flight was at 7:50pm, so we had plenty of time during the day to see my family a little bit more. In true American style, we went out to a mall during the day, got some lunch there and then kind of just hung about.

At this point we’d seen everything we’d wanted to see, we’d gotten to do everything we wanted and were feeling tired but completely satisfied with a lovely, lovely holiday.

As always, my goodbyes were tearful, and I’m so glad I had the Bulgarian there with me. No matter how old you get, it can be hard living so far away from family. Right now, I have my grandma back in Ireland, I’m in England, one brother is in Canada and the other brother and my parents are all in Florida. We’re pretty scattered for one family, and while Skype and WhatsApp are amazing, nothing quite beats being able to see the people you love and spend time with them.

I’m so grateful that I got to spend two busy, sunny, wonderful weeks in a place I love with people I love. It’s not a trip I’ll forget in a hurry.

Edit: I wrote this post shortly after our trip, back in June 2016. Thanks to work getting busy, it got put off for awhile until I had time to add photos and go through it properly. Now, three months later, this post is even more special to me. I’m so glad I wrote this while the trip was fresh in my mind, because I’m not sure I’d now be able to recall each day’s activities. This was one of the most special trips I’ve ever taken and I’m glad I can share this with you all.